COME AS YOU ARE

The borderline between absurd and normal behavior, images, physical codes and the simple need of two men from the Middle East to relax and withdraw from the politics of the region are the subjects of this piece. 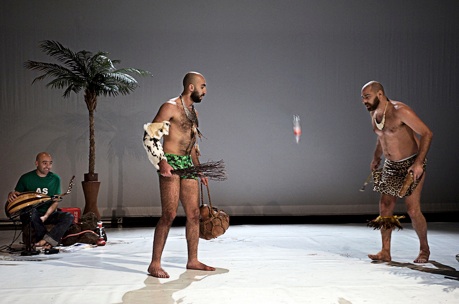 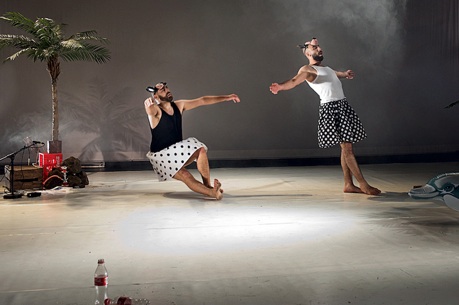 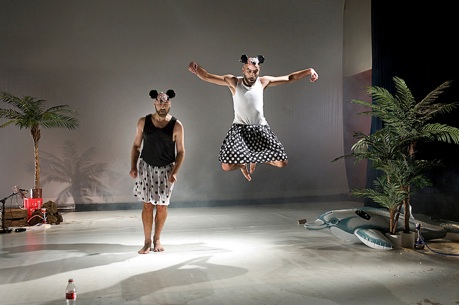 The meeting point of the two men is in the Sinai. Though a beautiful and serene place, their mental meeting point is a zone of unrest. However, a micro and macro communication arises between them, shot through with a good dose of black humor. As an American Coca Cola commercial stated: "For each weapon sold worldwide... 20,000 people share a Coca -Cola". Is this a joke? Is it pathetic? Or is there actually a bit of truth in it? Come as You Are invites you to see what a fresh Coca-Cola on the beach can do for the Middle Eastern man who drinks it.

Mohamed Fouad is a Cairo-based Egyptian dancer and choreographer. He has created and performed a number of pieces, and has recently established his own group, ‘Ka’af. Nir de Volff is a Berlin-based dancer and choreographer of Iraqi-Dutch descent, and director of the group Total Brutal. Total Brutal has performed Nir’s work throughout the world. Haytham Safia is a Utrecht-based Israeli/Palestinian musician and composer. Although he is essentially a classical Arabic musician, his compositions and music are influenced by other musical styles such as Persian, Balkan and jazz. Haytham has released eight CDs.

Come as You Are is co-produced by Dancing on the Edge and Grand Theatre Groningen.

Prev
Dancing To The End
Next
KOMOT